Last night, I tucked the kitties in, said goodnight, and climbed into bed. Almost immediately, Esteban started crying. He had been out with Jay and I for a lot of the night, so I thought maybe he was just having a hard time with going back into the closet away from us. I got out of bed, opened the makeshift door, and pet him for a little bit before putting him back away. I climbed back into bed and he started crying more. And more. And more. And louder. And harder. Then I heard Zissou hiss. Then I heard a big commotion that sounded like a cat climbing the wall. Jay banged on the wall and things quieted down for about 30 seconds. Then more crying, more hissing, and someone climbing the wall again. Jay sat up in bed and said, “Uhhhh, someone just jumped the door and is out of the closet!” I assumed it was Zissou. Nope. Esteban thought maybe he’d like to give me a heart attack! He scaled the makeshift door, jumped to the floor, and started crying on the bedroom floor!! 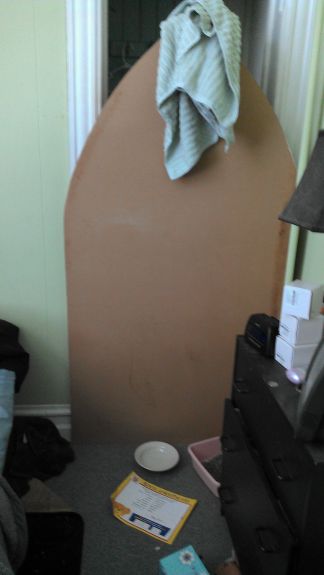 The “door” is about as tall as I am, so a little over 5 feet tall. It leans into the room a little, so there’s a slight incline and an extra space that other super-agile cats have taken advantage of. I’m guessing he did this, and got up to the low point at about 4 to 4 1/2 feet. He didn’t pull or tear any sutures or any part of his incision!!

I decided that he was going to have to spend the night with us. I grabbed the extra litter box, filled a bowl with water, and tried to go back to sleep. He kept crying, though! I spent a lot of the night comforting him, pulling his leg out of his e-collar (I really don’t know how he does that), and keeping him quiet.

I stopped at the humane society today to get more antibiotics for Zissou and was able to talk to the vet. She wasn’t concerned with Esteban’s giant leap, and is glad to hear that (besides that jump last night) he’s being careful about how he gets up and down onto and from things. She also appreciated the advice I’ve been getting from other front amp pawrents! I let her know that I think Esteban would benefit from some more foster care in “g-pop” (general population, ie out with the rest of the pack) after she sees him on Monday if she thinks he’ll be ok to not be segregated.

Last night, during his time out of segregation, Esteban found his voice and wasn’t afraid to hiss back at Saxon and Steve. He even hissed at Yorrick when he got too pushy with the sniffing! Today, he’s giving everybody their fair chance. He’s been hissed at a few times, but hasn’t hissed back. He head bonked Yorrick and sat next to Steve. Saxon came up on the sofa to sit near Esteban. Saxon tried to be good, but ended up hissing. We’ll get there!!

Did I mention, Esteban’s incision looks AMAZING?! He pulled one of his own stitches out last night. I’m not at all concerned. He’s 99% closed and healed. He’s also starting to center his front foot when he walks, sits, and lays down. Steve still doesn’t center her back foot!

5 thoughts on “That’s OK, I Didn’t Want to Sleep Anyways”