Friday will be Steve’s one year Adoptiversary…another case of Holy Crow time flies! It’s come full circle in that the foster cat has become the foster big sister. We just sent our first set of foster kittens of the summer (we started WAY late this year) off for spay/neuter and took in a special needs adult cat who I renamed Sif from Cous Cous. Sif is extremely skinny and has no confidence, so I gave her the name of one of Thor’s battlefield partners. She needed a strong and brave name. The name of a warrior who stuffs her face and fears no one!! Steve and the gang can meet Sif in two weeks if Sif wants to meet them.

I announced to friends and family last night that I’m starting my own pet sitting service. The past year of being helpless thanks to the vertigo caused me to have some kind of epiphany. I’m done putting up with everyone else’s BS! I’m going to do my own thing! I’m here to make one person happy and that’s ME! While I will offer the same basic services that every dog walking/pet sitting service offers, I will also cater to special needs pets. I have enough of a medical background that I feel comfortable sitting for pets that some services may turn down. I can administer insulin injections and subcutaneous fluids. I am also familiar with post op patients (even severe ones like amputations!) and know what to look for if an owner has to run out of town during the post op period. If I have to bring a client’s pet to the vet, I know what questions to ask.

I really wonder how much of this would have happened if Steve had never entered my life. We continue to speculate if she was the cause of my vertigo. If I stop taking Benadryl, the vertigo comes right back nasty as ever. The vertigo started when Steve showed up. If I didn’t get the vertigo, would I have been brave enough to leave my decent pay, but miserable, warehouse job to do what I really wanted to do? I really think I owe my independence to Steve.

Fingers crossed this works out!

I can’t believe it’s been a whole year!!

Just over a year ago, I agreed to foster a 2 year old cat with an upper respiratory infection who also needed to undergo amputation surgery due to a deformed leg. I wanted the experience of caring for a post op pet. A good Samaritan had dropped this sweet, orange and white cat off at the humane society where I volunteer. No one knew why her leg was mangled and deformed the way it was. They knew that no surgery could fix it and that chances were she would get it caught in something when jumping or running, so her best option was to have it amputated.

In eight days, Steve celebrates her one year Ampuversary. Two weeks after that, we celebrate her one year Adoptiversary (or Gotcha Day, if you prefer). This past week, I’ve …well…. celebrated isn’t really the word…. hmmm. I’ve reached a year of being out of work due to vertigo symptoms. Yesterday, I had a doctor’s appointment to get approved to return to work. Yesterday was one year to the date that I had my first doctor’s appointment regarding vertigo. I’ve been taking 50mg of Benadryl twice a day for several weeks. Of all things, that is what has improved my symptoms.

There is a conspiracy theory in this house that Steve is the culprit behind my vertigo.  If my vertigo started when Steve first showed up, and an allergy medicine is what is making me feel better, doesn’t it make sense that a rather severe allergic reaction to Steve caused vertigo? Volunteering at the humane society, I’ve seen a lot (a lot) of pets returned because someone in the family was allergic. I can’t even fathom getting rid of Steve. Even if the past year happened only because of her, the past year was made better by her! She never left my side and she always cheered me up! She’s my Steve!!

I constantly catch myself looking at her and being grateful that she is in my life. She put me through hell with her gastrointestinal issues and she may be the cause of my vertigo, but she’s the sweetest and funniest cat I’ve ever met. She still waits in the bathroom for me when I shower (many times she still jumps on the side of the tub). She gets zoomies like a pit bull! She’s more energetic and playful than her brothers. Sometimes she just runs as fast as she can from the kitchen into the living room, then stops in front of Jay and I on the sofa, stares at us, and meows as loud as she can! If we ask her, “What?” she meows again, quieter.

Steve is only three. I look forward to many more years of learning lessons from Steve, teaching what I’ve learned to others, and enjoying my clown of a Tripawd cat!

I have zero crafting skills, but I gave it my best shot and made a ribbon for Steve so she can be the first Tri-kitty represented! 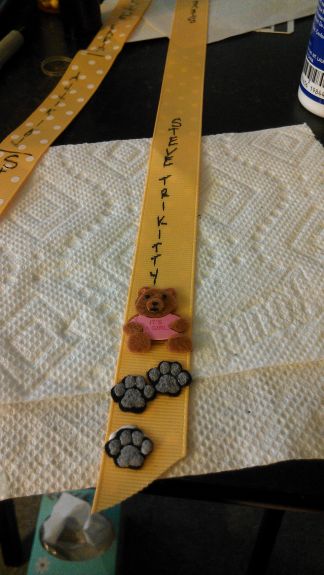 The best part was when I opened the packet that the paw prints came in, I noticed that they came in sets of three! It was like the paw prints were made for Tripawds!! 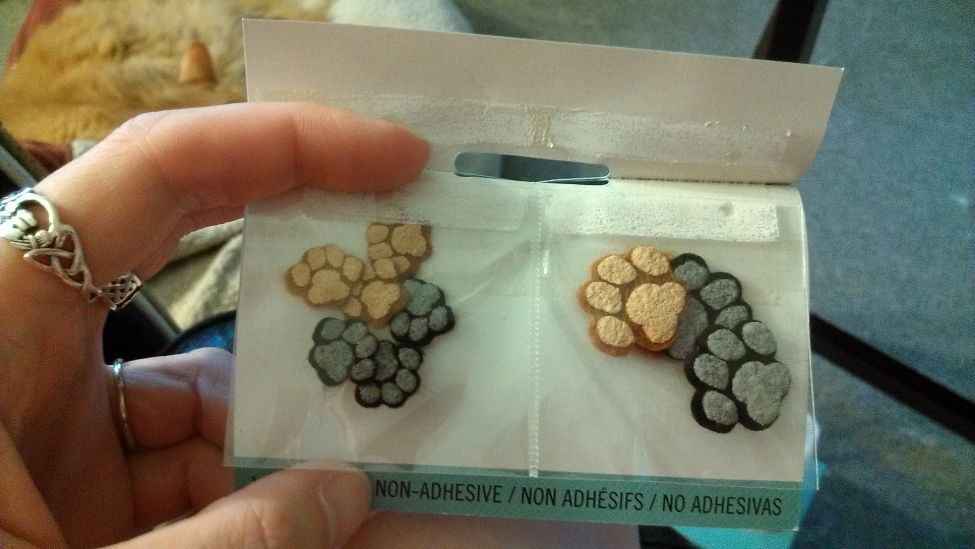 I’m going to drop Steve’s ribbon in the mail on Monday or Tuesday! We’re very excited to represent Tri-kitties and to maybe give them the encouragement they need to send in their own ribbons!