Steve is 100% back to her old self! Well, except for her coat. Her belly fur is growing back and I had to cut out A LOT of mats that built up while she wouldn’t/couldn’t groom. So she looks like she had a minor disagreement with a lawn mower….

BUT!! She’s back to zoomies, back to throwing herself around, back to antagonizing Saxon, back to chasing the red dot, back to chasing everything and anything, and most importantly (to me anyways) she’s back to sitting on the side of the tub while I take a shower! Oh, and have I mentioned that she chewed my flip flops?! I thought it was Yorrick until I saw the kitty teeth marks. Steve is the only cat in the house that chews. I bet she was counting on me blaming Yorrick, too!

I would say that Steve has no idea that she had any surgery!

She’s pretty gassy, and her poos are still soft. She still leaves some marks on the floor as she leaves the litter box, but I can’t complain at all! She’s eating a regular diet, which means she gets to eat with her brothers! No more separate feedings!!

And lastly, Steve has a new foster brother! His name is Ull. I chose that name because we’re fostering him for socialization. A year ago, we were fostering Sif for socialization. We named her Sif because Sif is a Norse goddess associated with strength and courage. Ull, in Norse mythology, is Sif’s son! Fitting, right?

Steve was doing this all morning while I ate breakfast! If you ask me, I’d say she’s feeling pretty good!! I’ll be donating her e-collar and the remainder of her Metacam (pain med) to the Humane Society this weekend! GOOD RIDDANCE!!!

Steve got her sutures out this morning and has been let out into gen pop!!!!

As first she was moving slow, was hiding, and wouldn’t jump into her window to eat. I had to lift her up into it so she could have her first breakfast out of the closet in her favorite place. I thought maybe she was in pain, but as the day has progressed she’s been jumping in and out of her window and on and off of the crate.

It’s so nice to have everything back to normal again! More than normal!! Steve doesn’t need a special diet or medication anymore!

It’s crazy to me that Steve’s surgery dates were so close together. Next year, when I celebrate her Ampuversary, it will be much more special to me!

Just a quick update on Steve’s progress! Her incision looks great and she continues to be annoyed that she’s in a small closet instead of out with everyone else!! I just made the appointment for her suture removal – Tuesday the 8th at 9am!

As for her…uhh…plumbing? She seems to be getting better at feeling and controlling her urges. I’m seeing less accidents on the floor and more poo in the litter box. The consistency is a bit more solid, too. More formed anyways.

Last night I took her cone off for a bit and supervised her while she did her thing. First, she attacked her cone! She showed it how she really felt about it! Then she bathed a bit (especially her dirty rear end). Fianlly, she ate so fast she threw up!! Oops. Should have seen that one coming…

I’m off to bring a cake I just baked to our regular vet to say THANKS for all that they did! On Monday
I’ll be baking cookies (or another cake) to bring to the specialist’s on Tuesday to thank them! 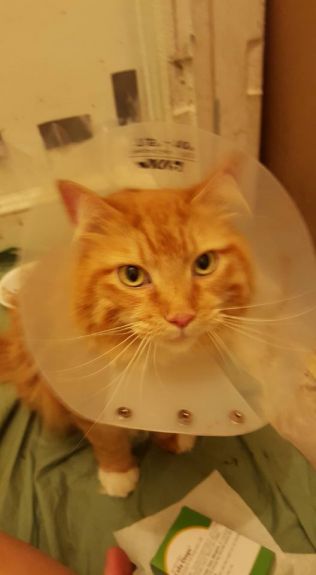 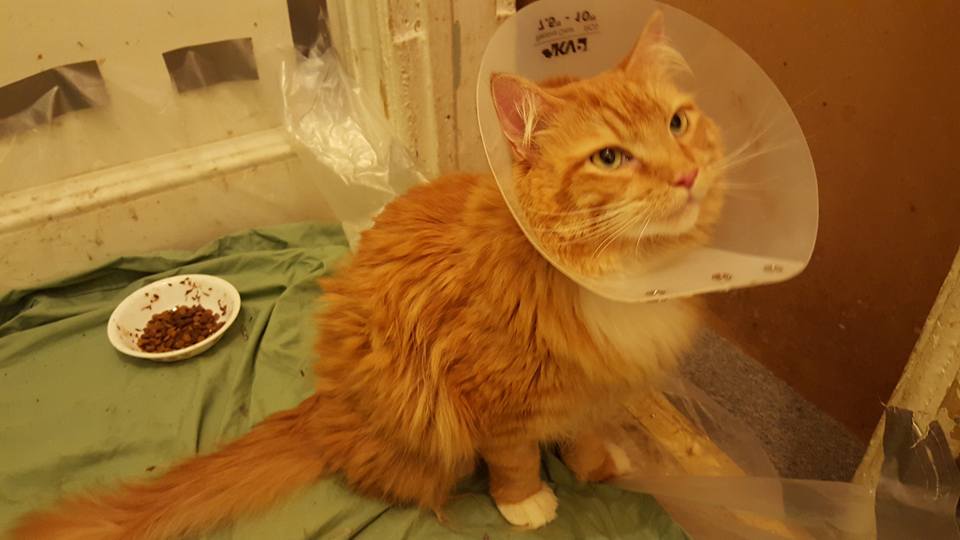 Have I mentioned how much of an inconvenience this all is to Steve? She would really like to know when she can get the damn cone off of her head and when she can leave the closet. This is all interfering with her running and jumping and climbing and throwing herself around. Oh, and especially with her sitting in a window watching the birds and squirrels. The closet doesn’t have any windows. Can anyone do anything about that?

Every time I go into the closet to check on Steve or feed or medicate her, she gives me a look like, “Am I getting out now?!” Anyone who doesn’t know her would not look at her and think that she just had major abdominal surgery! I’m not surprised either. She was over her amputation so quickly, of course she’s over this surgery after 2 days!

I’m glad I mess proofed the closet. Steve is getting used to what her body feels like now with several inches less of colon. She’s only made it to the litter box once, but I’m so proud of her for that once!! It means she felt it and reacted to it! Several people – including the doctor – have told me that it improves. We’re only four days out, we have lots of time!

Who wants to see her incision?! 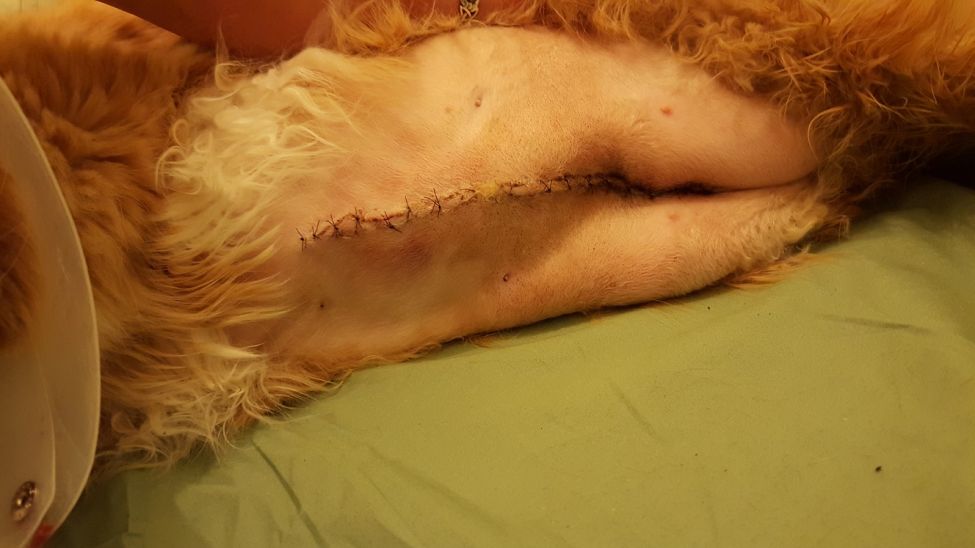 It goes down another inch or two. It continues to look great! They suggested icing/warm packing it, but I’m not about to irritate it or her when it looks that good!

It’s weird to see her stump shaved again. You can see how much of her belly is shaved. They shaved her whole back end, too, for sanitary and cleanliness reasons. So, her curlies on her belly that I love so much are mostly gone and her stump is mostly shaved. She’s also severely matted because she can’t groom. I tried combing her, but she hates to be combed when she feels perfectly fine. I had to cut a big chunk of fur from her lower back. I’m going to have to cut more. Oh well. She didn’t look so hot when she first came to us. She was a little matted and her fur was a mess. It barely took any time for her to fluff up and get beautiful! And her curlies will be back!!